Growing Rhubarb in the Garden

Rhubarb is not a difficult or expensive plant to grow in the garden and is therefore an ideal choice for the first time vegetable grower. It is a hardy perennial plant which becomes dormant during extreme cold or very hot weather.

If the rhubarb is needed for a specific purpose it is recommended that rhubarb is grown from one year old plants or crowns. It can be grown from seed but this takes a long time and generally may not grow true to type. Growing from an established rhubarb plant guarantees the variety and its purpose.

Planting
The crown or root should be planted during autumn and spring. They require planting about 1m (3 feet) apart to prevent crowding and to allow the plant to establish a large root system.

Soil
Rhubarb grows best in well drained soil that is rich in organic matter. It is happy in an acid soil.
Before planting, work plenty of rotted manure or compost into the soil to enrich it. Dig a hole slightly bigger than the plant or crown. The top of the crown should sit just above the surface of the soil.

Care
During the first year after planting the stalks should not be picked as this can affect subsequent crops by weakening the plant. The young plant needs to establish itself and form a strong healthy crown. When seed stalks are produced by the plant it is advisable to cut these as the plant will put its energy in to seed production, rather than edible stalk production. These and the leaves can be composted safely in a home compost bin.

It is beneficial to an established plant to apply composted manure or leaves in autumn or early winter, being careful not to cover the crowns to prevent any rotting. One or two shovels full would be sufficient. Too much nitrogen can make the plant flower which is undesirable unless the rhubarb is of an ornamental variety. 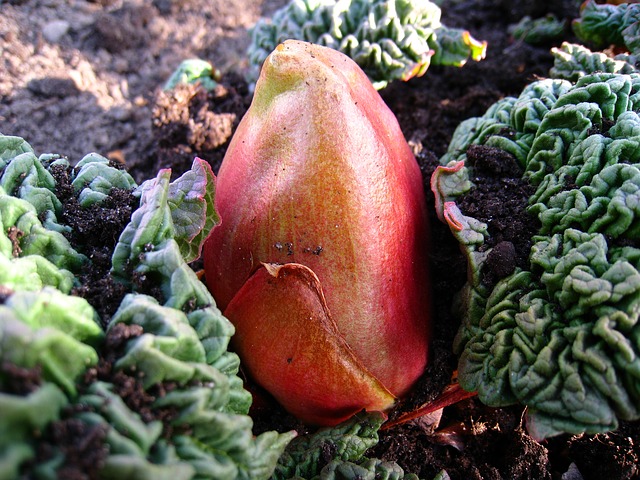 Rhubarb is fairly pest and disease resistant. The only thing to watch for is rot; this can be avoided by planting in well drained soil and not burying under compost. If rot is caught early, the rotten piece of root can be cut away and you can replant the rest. This will hopefully save the plant.

Propagating
Every 4 to 5 years you will need to dig up the crown to either trim it down to 4 or 5 buds or divide it to create more plants. Select pieces that have buds showing and these should have more success than a piece without. This division should be done between November and March while the plant is dormant. It is possible to make up to 6 plants from one well grown crown, depending on the variety chosen. In most cases they will not all grow but it is worth having a go at propagating your own plants.

Tips for growing your own Forced Rhubarb at home
Home gardeners can achieve the same conditions by using purpose made terracotta forcers or an upturned dustbin or a “Dalek” compost bin, packed with straw, can work very well and are a cheaper option. You need something that shuts out the light and forces the rhubarb into early growth.

However forcing exhausts the plant, so once you have forced one crown it must be rested for two or three years and allowed to grow naturally. Some gardeners just discard the crowns they have forced.

We advise you plant three crowns so that one is recovering from being forced the year before, one is cropping naturally and one is being forced you will be able to have a supply of forced stems every year. However the yield from forced rhubarb is roughly half that of a plant grown outside.

If your rhubarb crowns become too large, lift and identify the large dome-like buds and, using a sharp spade, split into chunks containing 4-5 buds. Replant in enriched soil containing garden compost or manure, making sure that the top of the clump is just above the ground about 75cm apart. Do not pick any stems in the first year or two and always remove any flowering spikes.

Browse our range of Rhubarb Plants

what is Forced rhubarb?

A number of the remaining Yorkshire growers are fighting to gain EU protected status for forced rhubarb. Only a few decades ago Yorkshire was producing 90% of the worlds forced rhubarb. This is now much less with forced rhubarb being imported from countries such as Holland.

To produce forced rhubarb takes a minimum of 2½ years. The rhubarb roots (crowns) are grown outdoors for 2-3 years. They are then lifted and left on top of the ground until either a frosty spell of weather or cold rain. This is needed to trick the crown into growth once in the shed.

An outdoor crop is not harvested to ensure the crown has the energy within it to produce quality stalks in the forcing sheds.

The large crowns are placed in the shed by hand so they are not damaged. They have to be carefully placed close together and the right way up. This happens around the beginning of November.
The rhubarb is grown in warm dark sheds. It is this combination that encourages the plant to grow. Originally coal was used to heat the sheds but diesel is now used due to the Clean Air Act. 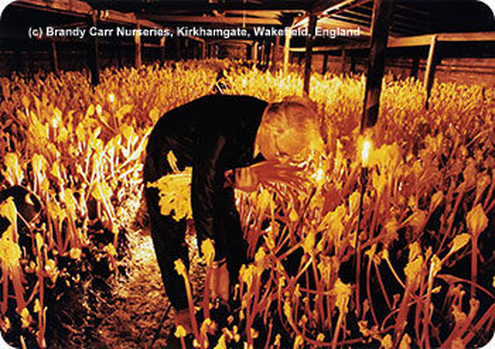 Traditionally candlelight is used in the sheds to harvest the crop, soft light will not affect the rhubarb’s growth. The rhubarb is harvested between December and the end of March.

It is much deeper in colour than outdoor (green top) rhubarb with a more delicate flavour. It is expensive to produce, as it is labour intensive requiring many man-hours to lift in the fields and place in the sheds.

After the forced rhubarb has finished the crowns are composted, all their energy is used in one harvest. New crowns have to be used each year.

Browse our range of Rhubarb Plants