tips for growing your own liqourice

Sweet liquorice is a member of the pea family. It is native to south­eastern Europe and south-west Asia. The Greek name Glycyrrhiza translates as sweet root. The plants are graceful, presenting a feathery appearance from a distance. Attractive blue flowers develop in late summer. It grows to a height of between 1.5 metres and 2 metres with a spread of 1 metre.

Planting
Liquorice will grow in any well drained soil, but grows best on sandy soil near streams. It will not flourish on clay, preferring rich fine soil with an abundance of moisture during the growing period, where the ground bakes hard during late summer. It thrives in a sunny position.

Any stones must be removed as roots can grow up to 4 metres in length if not harvested. The roots are double, a tap root and horizontal rhizomes. These rhizomes throw up stems with leaf buds in their second year.

Harvesting
English Liquorice is harvested in late autumn and is mainly used to make extract. It is bright yellowish brown and is flexible, easily cut with a knife to show a yellow juicy substance. 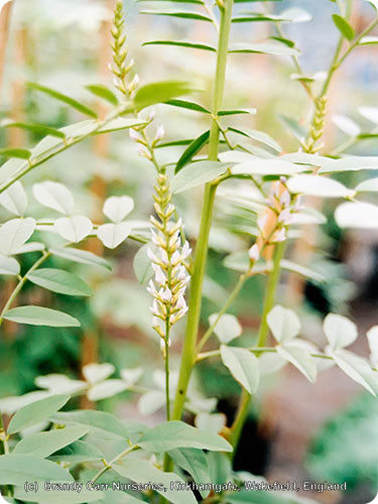 It has a peculiar earthy odour and a sweet flavour. When harvesting the Liquorice root the plants are dug up and the roots cut away from the crown.

The crowns are then stored in slightly moist compost and put in a cool dark place. In spring the crown can be planted out after all risk of frost has past.

Liquorice uses
Liquorice has various uses. The most well known is in the making of confectionery, the most famous being Pontefract Cakes. The other is using the hard red seeds to make prayer beads. In India they are used to weigh gold, under the name of Rati. They weigh about a carat each.

Most liquorice used today is imported from Southern Europe or South Eastern Asia. The largest country to export to England being Turkey. Russia also grows liquorice, but it is of an unacceptable quality to the English confectionery industry.

The English liquorice growing industry has declined due to the costs involved; an acre of land will produce 4 or 5 tonnes of liquorice from 4 year old plants. It is a labour intensive crop.

Your very own plant!

We currently have our home produced young plants for sale.

These are in a bio pot to ensure there is no disturbance to the tender root system. These quality plants will establish themselves quickly either in the garden or in a pot and soon become a talking point!